The Sacrament of Birth: Her Highness the Queen Bee.

We are going to witness the mistery of birth. A bee is born — not an ordinary one, but the most important in a beehive — a queen bee. By the summer up to 2000 worker bees are born every day and just a few queens during the whole season. Each one is to become a founding mother or a new colony and will either lead away the swarm, or consolidate the remaining part of the former colony left in the hive after swarming. Actually in our own hives we manage to maintain a stable peaceful coexistence of two or three queens depending on the season, but that is achieved thanks to technology and rather contrary to bees’ social biology.

In any case the birth of a queen bee is an event rather uncommon, and very few people could claim they had a chance to witness it. A special cell on the combs where queen bee is formed is called the queen cell. Bees build it vertically, with the exit side pointing down. The queen bee occupies it head down, too. When the time comes to move out, this arrangement makes it easier for her to chew off a circular cut, open it like a hatch, and emerge through it with minimal efforts. Her own weight will be helping her while processing. However, this natural position of a queen cell is not quite suitable for watching and taking pictures.

Rumours are that the King Louis XIV faced a similar problem when he expressed his keen interest to witness the birth of the heir. If historic legends are true, it is since that time that those giving birth have to accomodate themselves not the way it’s easier and convenient for themselves, but to convenience of those who are there to watch and help.

So, we just followed in the great king’s footsteps, when we turned the frame over with the queen cell upwards. This may have made it harder for the newborn to come out, but the whole scene became so much easier for us to film, and better for you to watch.

And what are we seeing? here is the birth of a workerr bee, for comparison. Nobody cares, nobody bothers to assist, comfort, or even slow down for a moment. Bees run around on their business, literally stomping on the heads of the babies. By contrast, a queen cell is surrounded with courtiers. Hard to say, if they are really helping, but they do bustle around and show their ardour.

The most active are engaged in chewing off the opening hatch. The crack widens, letting one tendril out, then another. The whole cortege is excited.

Fast tendrils touching seems to let them actively communicate in something like the Morse code.

From inside her cell, the queen pushes hard on the hatch with her head. Because of pressure it starts to open, bees rush to assist. Final efforts and the queen finally manages to squeeze herself out. She’s born! long live the queen!

Maybe it’s a bit early to call the newborn a queen bee. She’s rather a young princess. But her healthy look makes the bees and the beekeeper happy: «Beautiful! Purebred! Promising… Good start…»

And somewhere near the princess is a young worker bee that was born a moment ago close by, all on her own. She totters alone, ready to join the rest and work tirelessly for the benefit of the colony all of her short life. Indeed, as a poet said:»For everyone has their story… and their path to glory.» 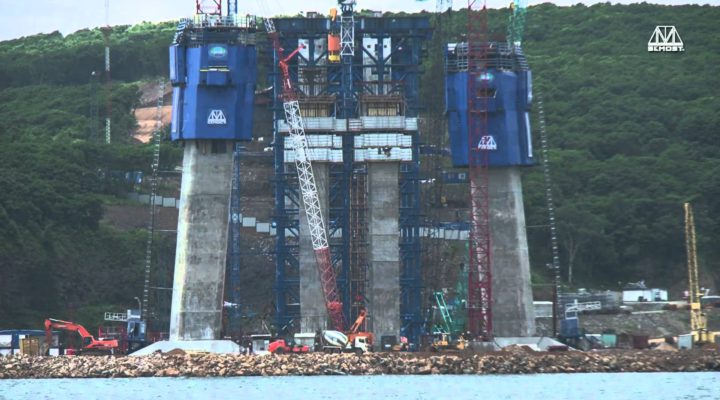 Bridge to Russky Island in Vladivostok